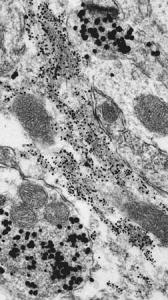 Aurion has confirmed its leading role in immunogold technology through a co-authorship in a publication in the Journal of Histochemistry and Cytochemistry 49(3): 279-283 (2001).

In this publication it was demonstrated for the first time in history that it is possible to perform a double labeling experiment using two ultra small gold conjugates and differential silver enhancement using Aurion R-Gent SE-EM, the enhancement reagent of choice for electron microscopy applications.

This approach was successful thanks to the excellent and tuned qualities of the reagents involved:

One more item was required: the Enhancement Conditioning Solution (ECS)

What is ECS intended for?
ECS is used as a bridge solution between the gold incubation and the silver enhancement.

Obstacles in Double Labeling
When performing a double labeling with ultrasmall gold conjugates a few obstacles have to be overcome:

Aurion developed, in close co-operation with Hong Yi from Emory University, Aurion ECS (Enhancement Conditioning Solution) which replaces the fixation and water wash step. The product is compatible with buffer and silver enhancer and does not affect morphology.

Aurion ECS in Double Labeling
Schematically this is the sequence of steps for double labeling using ultrasmall gold conjugates:

Please note that Aurion ECS is specifically tailored to be used with Aurion R-Gent SE-EM.

Aurion as well as leading researchers in the field are convinced that these new possibilities will facilitate and simplify immuno electron microscopic research in the bio-medical field.